Mid American has been hosting pompon & dance competitions for over 30 years.

In that time, MAPP has established itself as a leader in the field through an expertly trained & certified judging staff & an experienced & professional competition staff. From traditional Mid American Style Pompon to hip hop & jazz, we hold a variety of competitions built for every genre of team expertise. 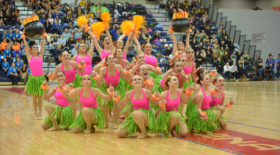 If you are looking for a venue to compete with your Middle School, High School, or Collegiate team’s hip hop or high kick routine, the Mid American Pompon Hip Hop & High Kick Championship is just the high-caliber forum for you.

The MAPP Hip Hop & High Kick Competition is attended by over 1000 members of School-Associated Teams, Studio Teams, and All-Star Groups annually, and is traditionally held on the first Sunday in November.

Each Middle School & High School Team must earn their place in the State Championship lineup by first competing at a local Regional Competition.

The best teams from each Regional Competition are then invited to compete at the Mid American Pompon State Championships, traditionally held on the first Sunday in February. Collegiate Teams are also invited to join this State-level competition. The MAPP State Championships are attended by over 80 teams annually.