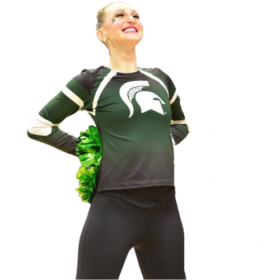 Each February, Mid American Pompon hosts the Mid American Pompon State Championships. This competition is open to all middle school and high school pompon or dance teams that have received a qualifying score at a Regional Competition. This competition is also open to any Collegiate pompon or dance team. For information on qualifying for the MAPP State Championships, CLICK HERE.

Pompon performances are a team performance filled with athletic movements, exciting visuals, & clean formations completed in a precise, sharp, and entertaining manner. Eligible teams compete within divisions that are determined by their school size as well as either their respective score received at Regional Competition or their competition level, in the case of Collegiate teams. Every competing team will receive a placing within their division. The winning team of each division is invited to perform an encore performance, where they are officially announced as State Champions!